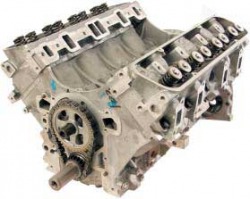 The Rover V8 engine is a compact V8 internal combustion engine with aluminium cylinder heads and cylinder block, originally designed by General Motors and later re-designed and produced by Rover in the United Kingdom.It has been used in a wide range of vehicles from Rover and other manufacturers over several decades

The Rover V8 began life as the Buick 215, an all-aluminium engine introduced for the 1961 model year. The compact engine was lightweight, at just 144 kg (318 lb), and capable of high power outputs: the most powerful Buick version of this engine rated 200 hp (149 kW), and the very similar Oldsmobile "Jetfire" turbocharged version made 215 hp (both numbers SAE gross). Based on sales volume and press reports, the engine was a success. Buick produced 376,799 cars with this engine in just three years. A comparable number of Oldsmobile 215 engines were produced. The aluminium engine was relatively expensive to produce, however, and it suffered problems with oil and coolant sealing, as well as with radiator clogging from use of antifreeze incompatible with aluminium. As a result, GM ceased production of the all-aluminium engine after 1963, although Buick retained a similar iron engine[1964-1980], as well as a V6 derivative[1962-2008] which proved to have a very long and successful life.

In January 1964 Rover gave American operations head J. Bruce McWilliams permission to investigate the possible purchase of an American V8 engine for Rover cars. It is usually said that McWilliams first saw the Buick V8 at the works of Mercury Marine, where he was discussing the sale of Rover gas turbines and diesel engines to the company (Mercury did indeed use the Land Rover diesel engine in marinised form). However, it seems unlikely that McWilliams was unaware of the Buick engine before this. In any case, McWilliams realised that the lightweight Buick V8 would be ideal for smaller British cars (indeed, it weighed less than many straight-4 engines it would replace. McWilliams and William Martin-Hurst began an aggressive campaign to convince GM to sell the tooling, which they finally agreed to do in January 1965. Retiring Buick engineer Joe Turley moved to the UK to act as a consultant.

As well as appearing in Rover cars, the engine was widely sold by Rover to small car builders, and has appeared in a wide variety of vehicles. Rover V8s feature in some models from Morgan, TVR, Triumph, Land Rover and MG, among many others. The first use of the engine by a UK maker was actually Warwick who fitted the engine, purchased directly from Buick, to the stillborn Warwick 305GT. They have even been used in light aircraft due to their light weight and high power output.

The Rover V8 has long been virtually the standard engine for hot rod use in Britain, much as the Chevrolet small-block V8 is for American builders. Even in the US there is a strong contingent of builders who select the Buick or Rover aluminium V8 engine for use in small sporty cars like the MG MGB and the Chevy Vega. (Note also that the 1964 Buick iron-block 300 cubic inches (4,900 cc) engine had aluminium cylinder heads and a longer stroke crankshaft which with minor modifications can be used with the Buick 215 or Rover engine blocks to produce a high output, very light weight V8 with displacement of up to about 300cid). (The 300 crank in the 215 block yields 260 cubic inches (4,300 cc))

The demise of the MG Rover Group in 2005 led to a halt in production of the famed "name" Rover V8 after 40 years. The last Rover to have a real Rover V8 was the Rover SD1 Vitesse which was replaced by the Rover 827 Vitesse with a 2.7 Honda V6 unit, The Rover V8 remained with Land Rover until being sold to Ford by BMW. However, Land Rover desired for production of the engine to continue, and they arranged for production to restart in Weston-super-Mare under MCT, an engineering and manufacturing company. Although Land Rover has switched to the Jaguar AJ-V8 engine for new applications, MCT will continue limited production of the engine for the indeterminate future, supplying engines for aftermarket and replacement use.

It is also interesting to note that the "Rover V8" based on the Buick design was not the first V8 produced by Rover. When the Rover Co was having engineering differences of opinion with the development of the Whittle turbine engine, the Wilks' did a deal with Rolls-Royce to swap technologies. The turbine engine project went to Rolls-Royce and Rover Co took over the V12 Meteor production used in the Centurion Tank. From this a V8 variant was developed the Rover Meteorite, also known as Rolls-Royce Meteorite, was a V8 petrol engine of 18.01 litres (1,099 cu in) capacity. In essence it was two-thirds of a V12 Meteor, and it shared the Meteor's 60° vee angle. Meteorites were built for vehicles, for marine use and as stationary power units.

As the aluminium block made this engine one of the lightest stock V8s built, it was an obvious choice for use in racing. Mickey Thompson entered a car powered by this engine in the 1962 Indianapolis 500. From 1946 to 1962 there hadn't been a single stock-block car entered in this famous race. In 1962 the Buick 215 was the only non-Offenhauser powered entry in the field of 33 cars. Rookie driver Dan Gurney qualified eighth and raced well for 92 laps before retiring with transmission problems.

The Australian firm Repco converted this engine for Formula One by reducing its stroke to some 61 mm (2.4 in) to give 3 L (~183 cu in) and fitting a single overhead camshaft per bank rather than the shared pushrod arrangement. Conrods from the Daimler 2548 cc V8 were used.Repco-powered Brabhams won the F1 championship twice, in 1966 and 1967 For the 1968 season, the Repco engine was fitted with new four-valve, dual overhead camshaft heads. This made the engine roughly as powerful as the Cosworth DFV, but proved to be too much for the stock block, which broke on many occasions. Repco also experimented with 4.2 L (~256 cu in) derivatives of the Rover V8, to some success despite problems with massive vibration.

The Rover version of this engine was extensively developed and used for rally racing, especially in Triumph TR8 sports cars.

The last mass-produced application of the Rover V8 was the Land Rover Discovery, up until the vehicle was redesigned in 2005. It is still used by some hand-built sports cars built by some independent manufacturers.

Moreover, in the mid-1980s, hot rodders discovered the 215 could be stretched to as much as 305 cu in (5 l), using the Buick 300 crankshaft, new cylinder sleeves, and an assortment of non-Buick parts.It could also be fitted with high-compression cylinder heads from the Morgan +8. Using the 5 liter Rover block and crankshaft, a maximum displacement of 317.8 cu in (5,208 cc) is theoretically possible.